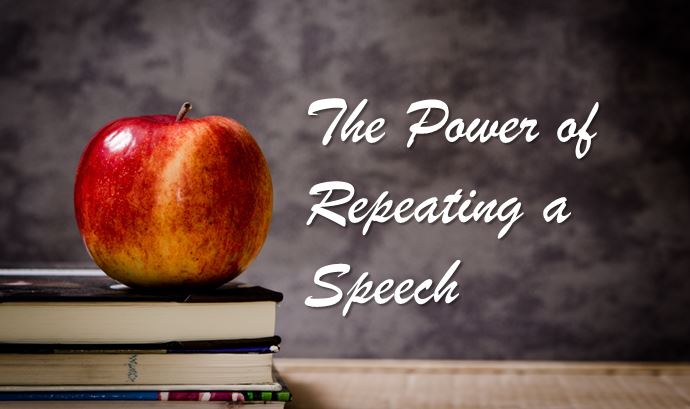 The Power of Repeating a Speech for you and the Audience

The second project on all the Pathways is to prepare and give a speech, gain feedback and then give the same speech again.  This enables you to think about the evaluation and suggestions you were given, practice incorporating the improvements and then of course, give it a second go.  When you think about it there aren’t many times in life where you get a second chance to nail a project so this is a gift.

However, when I was working on this project I didn’t see it like that.  As I was new to Toastmasters I hadn’t seen anyone else give a speech and repeat it.  I knew that it was important to focus on the audience and the speech being about the audience not you so, as a result, I was really worried that it would be very boring for the audience to hear the speech a second time and let this add to my nerves.  On reflection I can see how silly this was.

When I gave this speech, my topic was on my skiing holiday sharing a day in my life; getting up all excited, trudging to the slopes, my exhilarating day on the slopes, rounding off in the evening with great company.  I used lots of props in this speech which was liked but I was given feedback that I was taking too much time finding the props and leaning down to fetch them.  The feedback I had suggested I have the props closer to hand.  I also had good feedback on how to pace the speech better.  All things I was then able to practice improving at home in front of the mirror.

I have now seen many people give a speech and repeat it and it is far from boring for me in the audience.  It is interesting to see how that person has taken on feedback and applied it.  On the second time of hearing a speech, you often take notice of elements you had missed in the first round.  It is fun to do a kind of ‘spot the difference’ in your head around what they have done to improve it.  Seeing others progress and take on feedback naturally gets you thinking yourself.  If I had that feedback what would I personally do next time?

Often the same evaluator, evaluates the speech again the second time.  Again this is a good challenge for the evaluator to notice the improvements and importantly ensure they are not just doing a carbon-copy of their previous evaluation speech.

Every time I have seen a repeated speech I’ve seen a marked improvement in the speech delivery.  It’s as though the person increases in confidence as they are now more familiar with the topic and what the audience is looking for so they can go for it.

If fact, often the audience differs from week to week so not everyone will hear you give the same speech anyway.

So when you are facing the ‘repeated speech’ project see it for the gift that it is – the opportunity to build your skills and showcase them to the club.